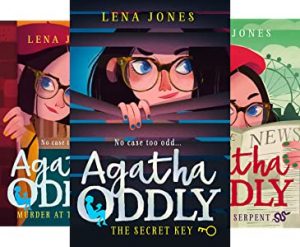 Agatha Oddlow has been a detective for as long as she can remember – she’s just been waiting for her first big case. And nothing gets bigger than saving the City of London from some strange goings-on. With a scholarship to the prestigious St Regis School, a cottage in the middle of Hyde Park, a room full of beloved sleuthing novels, and a secret key that gives her access to a whole hidden side of London, Agatha is perfectly poised to solve the mystery of what’s going on.

Murder at the Museum: A second mystery for thirteen-year-old Agatha Oddly – a bold, determined heroine and the star of this stylish new detective series. Agatha Oddlow’s set to become the youngest member of the Gatekeepers’ Guild, but before that, she’s got a mystery to solve! There’s been a murder at the British Museum and although the police are investigating, Agatha suspects that they’re missing a wider plot going on below London – a plot involving a disused Tube station, a massive fireworks display, and five thousand tonnes of gold bullion…

The Silver Serpent: A third mystery for thirteen-year-old Agatha Oddly – a bold, determined heroine and the star of this stylish new detective series. Agatha Oddlow is on the case with yet another adventure! An assistant at the National Gallery has gone missing, but when Agatha begins investigating, she uncovers a plot bigger than she could ever have imagined. Join Agatha as she travels throughout London and into the very heart of the mystery…

The Boy Behind The Wall 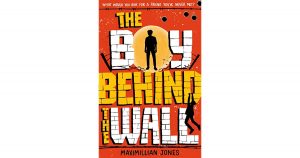 A page-turning thriller for 11+ readers set on either side of the Berlin Wall, perfect for Alex Rider and CHERUB fans.

What would you risk for a friend you’ve never met…?

In the 1960s Berlin, the Wall is everywhere. It cuts through streets, parks, and even houses. Teenagers Harry and Jakob live on either side of the divide.

In West Berlin, American Harry witnesses the brutal shooting of a boy trying to escape over the Wall into the West and decides to emulate his comic book heroes and help those in the East however he can. On the other side in East Berlin, Jakob is the adopted son of a high-up Stasi officer, feeling suffocated by the rules of a strictly regimented society and desperate to find his real family.

When Jakob finds Harry’s message over the Wall, he grasps the opportunity. The boys begin a secret friendship, evading the authorities by using lemon juice as invisible ink to share hidden messages. They soon realise that a bold plot to carve a tunnel under the wall is the only way out for Jakob – and it’s time to put their friendship to the test. Just how much are they prepared to risk for each other – and freedom?

‘A real page turner which will keep you reading long after you should have turned out the light!‘
Independent Book Reviews – Fiona Sharp

‘It has everything a school Library Manager could possibly hope for in a book to recommend to their students. It gives the reader historical knowledge. It is an adventure. It is thrilling. The pacing is perfect. There is no bad language’‘
Dudley School Librarian